Vasundhara Tewari Broota, is an experienced painter whose work explores the potential of figurative paintings. Her images surface out of the perception of a women and psycho-political existence of the female body. Vasundhara first drew attention for her sensitive mixed media work in which an interpretation of the suppressed womanhood within the existing societal structure in contextualised by her female nude images. Her treatment and use of the female nude soon diffuses she creates are abstraction and are often emblematic of the inner life or contemporary women. She graduated from the University of Delhi, with literature as her subject and studied at Triveni Kala Sangam, New Delhi. During 1982-84 she worked on a cultural scholarship awarded by the department of culture of the government of India. She is part of several groups and solo exhibitions like Vadhera Art Gallery, Lalit Kala Akademi and TAIS, Tokyo and the Oberhausen short film festival, Germany. 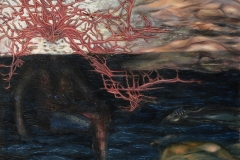