Sanjay Manubhai Chitara has been working relentlessly to create and promote Mata ni Pachedi , folk paintings local to the Gujarat region which can be traced to a lineage of three centuries of Chitara artists . He was mentored by Chunilal, a recipient of the National Award and spent much of his childhood observing his father and went on to receive the National Award in 2000, and Shilp Guru award in 2009.

One of the few families to this day , they continue the practice of this art in ahmedabad near the Sabarmati river. This art thrives with its traditionality of the inherent knowledge of the Mother Goddess; this cloth is hung in the shrines and in private prayer rooms by the wealthiest patrons to the humblest commoner where in today’s time all castes are allowed inside the temples. This cloth, offered to Mother Godess to beseech her favor and protection against misfortune eg: illness, childlessness (esp male child) or poverty.

Over the last four decades this art has progressed, where his grandfather’s generation have developed an extended color palette which enhances the painting’s aesthetic merit; green, blue,indigo, mauve etc are incorporated. Sanjay’s work reflects a harmonious blend of variety of vibrant and carefully structured shades. He has made a radical change in the composition where he places each of his Goddesses in his own domain using vertical orientation which automatically influences his selection and
positioning of ritual elements within the frame with unique attributes like little known facts about Mata that he paints. He only uses the frayed bamboo reed which enables him to change colors multiple times. He only uses the traditional “Madeer Paat”. unbleached handwoven cloth for his art as opposed to canvas. 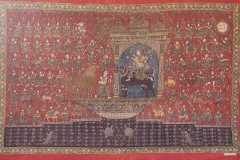 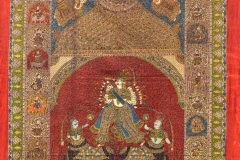 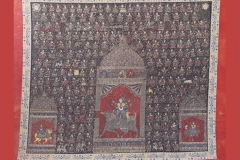