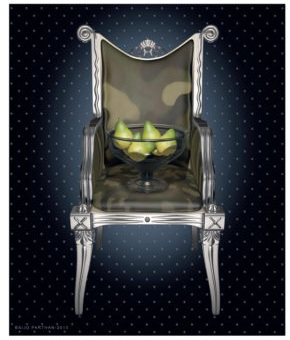 Biju Parthan’s work face off philosophy and technology with contemporary issue of memes, machines and computers . His journey as an artist has been very interesting since he began his professional life as an engineer. He veered towards art theory through his encounters with several books including Sartre’s Age of Reason. Goa and enrolled in a five year course in the fine arts. However, he reached a stage when he was disillusioned and gave up painting. This led him on a journey towards illustration and he did a brief stint at a few magazines. Finally in the 1990s he arrived at his current stylistic expression, where he examines technology and art with the same analytical lens used for art. He is especially interested in the interface of technology and our religious beliefs. Parthan uses multi media like the lenticular print, photorealistic acrylic on canvas and installation that explore a post human scenario.