Handcoloured Photographs or Indian painted photographs  began to be produced in the nineteenth  century, only few years after the introduction of photography to India. Following the decline of the tradition of photographic studio portraiture, Indian artists came to be hired to work for some studios.Their long practiced art of miniature painting was combined with the newly-developed technique of photography, adding color to the black and white or sepia images using mediums such as watercolor, oil paint, and gouache.This genre of embellishment created a hybrid form of visual culture called Indian painted photographs, a result of a deep visual tradition and mainly catered to the needs of the princely and elite classes in the country.

As a creative technique and tool,  hand painting offered unlimited scope in adding emphasis to an image: The Indian painted photographs could be partially painted  or completely painted over, leaving little trace of the original image.The final result revealed the artist-photographer ‘s rich tradition of artistry and workmanship.The painted photograph is a genre that marks a significant chapter in the history of Indian photography. Yet it is now almost disappearing as a technique due to the advent of colour photography and digital imagery.

In India, only a handful of artist-photographers are still continuing the legacy of this genre and tradition.Rajesh Soni as one of them  is the third  generation descendant of skilled artist- photographers who pursue the hand colouring technique for photographs. His grandfather Prabhu Lal Soni (1905-1958) had worked as a court photographer and painter for the late Maharana Shri Bhupal Singh of Mewar in Udaipur.He passed down his skills of hand-painting to his son, Lalit, who himself passed them down to his son Rajesh. At the age of eighteen  Rajesh began his forays into photographs, by photographing and then handpainting  them. Ever since Rajesh has been consumed by this vocation, and continues to be engaged in this art, continuing his family ‘s legacy of hand-painting photographs.

The 1966 Rajdoot Bike Series  presented in the show Hand Colour continues to be one  of Rajesh Soni’s most popular and endearing bodies of work. Stemmed in nostalgia and wishfulness of an era gone by, the concept behind it, was to halt  local citizens  on their way to work and induce them to  agree to be photographed on  a vintage 1966 Rajdoot motorbike. Rajdoot the word is very significant as it translates from Hindi  into English as ambassador  and  doot  also refers to a means of transport. In a small town or city where owning a vehicle is considered to be a symbol of success and an aspiration in life, Rajesh wanted to capture their sense of achievement while sitting on a bike. Each photo of the series tells a tale of its own and he has been fortunate to meet and capture some of the truly captivating moments of glee and curiosity from  passers by as they take a pose on this bike.

Those of a certain generation will recall that the Rajdoot was a successful bike of its era with brisk sales and immense popularity amongst semi – urban and  rural India  especially in the dairy business. All the doodhwallas or milk suppliers of that period  would be visiting urban homes to provide milk on Rajdoot bikes with large milk containers dangling on either side.

It was often said in those days “where  there were no roads in India, there were Rajdoots.” Middleclass Indians lived and breathed the style, stability and sensibility  of this motorcycle. As the name  reiterates, Rajdoot was the Doot of King or the Lord for Indian aspirants. Rajdoot, evolved into an integrated part of  life of almost every middle class family  in the nineteen sixties, seventies  and eighties. It continued to be much more than a regular bike it was an emotion and an aspiration because of its dynamic application in different phases of life especially signifying upward mobility for a certain class. Independent of the condition of the roads of the country, the Bike had always supported  it’s owner but unfortunately because of the Euro II Emission Regulation in 2005, it was phased out from the market. The motorcycle division of Escorts Group started manufacturing the Polish SHL M11 175 cc motorcycle under the brand name Rajdoot from 1962. Various derivatives were produced with slight changes in cycle parts, suspension and transmission. Production continued for over four decades. It was powered by a two-stroke engine.The two  models of Rajdoot of 2-stroke engine were  Rajdoot 350 and Rajdoot Excel T.The Rajdoot 350, or RD 350, was a two-stroke Yamaha motorcycle made in India by Escorts group from 1983 to 1989. RD stands for ‘Race Developed’ series, In India promoted by Rajdoot in collaboration with Yamaha Japan.The Rajdoot Excel T is a 173 cc two-stroke motorcycle that was made in India by Escorts Group.

Popularly going by the moniker of jeevan saathi or life partner  the long life and less maintenance issues  of the  Rajdoot Bike were the two parameters why this was the most loved Bike and the reason that in that  time in history, families would be giving this as dowry in several  marriages.  Everyone recalls an instance of this bike playing a role in getting them through difficult situations and romantic interludes. Memories abound of recollections of witnessing around  four to  five  people  seen sitting on the bike at the same time,  in dire emergency situations. In some ways this defined a very pure  relationship between man and machine. It was also in  its time,  the political choice of any political party. In each rally, one  usually saw hundreds of Rajdoots running across the street.As a symbol of power, it added this power back to the driver and empowered him like none other.

The enigma of the Rajdoot era still remains with a generation  filled with nostalgia and can be appreciated and revisited through Soni’s  hand coloured photographs in this seminal show  Hand Colour. 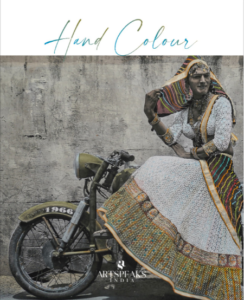 You can also email us at – artspeaksindia2@gmail.com